Just as it’s fun to eat your fruits and veggies when they’re really fresh and there’s not a lot of junk food distracting your palate, words are so fun to learn and play with. We delight in developing of Lake’s palate with a diet of diverse words, and relish the words he retains, and phrases he creates. His sentence structure and idioms reveal something of how he processes, organizes and stores new information. “Language nutrition” is the regular diet of different words children are exposed. It plays into the depth and breadth of their language acquisition and correlates with future successes. It’s shocking how much disparity emerges among children of different socioeconomic households. The word gap by age 3 approaches greater than a million words (Hart and Risley. 1995. Meaningful Differences in the Everyday Experience of Young American Children). This is sadly due to factors out of the children’s (and also largely per societies’ construct, the parents’) control, such as: how much they’re read to; what types of conversations they hear; and how much discussion they’re exposed to. It has made a strong case for early childhood education.

Lake breathes words. He trades in words like commodities. Lake’s learning of language is charming. He’s had a flair for the stuff from an early age. He started out bilingual, and then slowly took a preference to only speaking “Englisch” while retaining his German comprehension. Some degree of bilingual education creates an additional plethora of vocabulary words, as well as gaining awareness of another perspective on life. Being multilingual cultivates perception and an innate knowing that there’s more than one way of doing things.

We were contemplating childcare options after Lake was born when we spoke with my friends who had been hosting au pairs. In describing his family’s positive experience, he cited a study. Kids that learn more than one language knew there was a triangle behind a shield, even when they couldn’t see it directly from where they were sitting, if they had seen it first from a different chair; whereas, kids who knew only one language could only assert the presence of the triangle if they could see it from where they were sitting at the time. 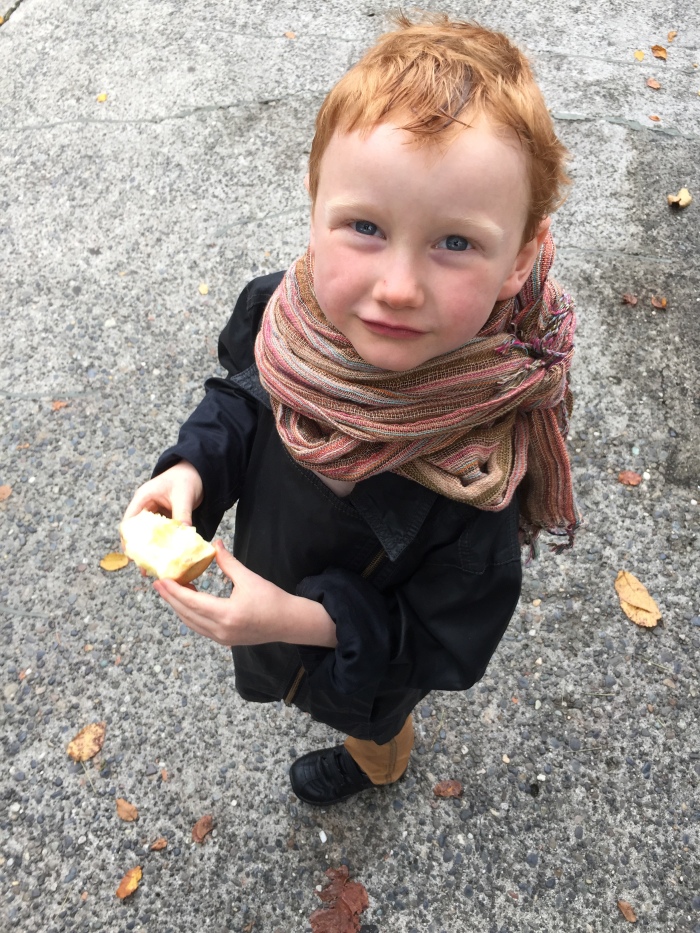 Lake has loads of perspicacity, especially for his age. Here’s some of the fun vocabulary and quirky things Lake says that I’m delighted to be able to share with you :

Fravorite (I’m careful not to correct his enunciation to “favorite” as it remains dear to me.)

Mama: We’re beautiful all the way from the inside out.

Lake: You’re beautiful from the outside in to your lungs.

Mama: Who told you that?

Mama: You know what mama cares about? You’re a hard worker. You’re kind. You’ve got a good attitude.

Lake: Yes, I’m all those things.

Lake: I love you all the way to your lungs.

Mama: Honey, you can’t put the mohair blanket on the floor.

Lake: If you ever see me doing something don’t put my clothes over my head.

Mama: Ok, I’ll be more respectful. Can you put your clothes on Lake?

Mama: That’s why I just dive it over your head and you put it on by reflex!

Lake: That’s the funniest thing you ever said. Reflex! What about some reflex?! Tsss

“I was surprised Baba wasn’t up yet. There was just loads and loads of sun riding in through my window.”

Holding up a pipe cleaner creation: “It’s a decoration. Is there any board where there’s some air between? To hang it? Like the swing.”

“I’ll be coming out of an unseeable notch for the entrance to my Nutcracker Sweet show.”

Q: What kind of cat likes to sail?

See how skillful I am at jokes?!”

Upon arriving home to Seattle Lake has a new bunk bed, and a new challenge to sleep in the top bunk. Michael thus prepared him for a successful bedtime before heading off to the airport to pick up Madeline, our new au pair… Lake reportedly said, “I can handle it all.”

You’re doing a swell job, Lake. Keep up the levity, and the good work eating your fruits and vegetables and digesting the languages you hear. These are perfect days to be alive. I’m glad I’m spending them with you!