We signed our escrow paperwork last night for the new house! Kim Jones of the mobile notary world came to facilitate the transaction. It was a late night family affair.


It’s hard to believe still, but it’s getting real; we are looking at moving this weekend. We felt like celebrating! So an impromptu popcorn party ensued complete with some singing, happy shrieking, some dancing about and some classic film from the 1990s. Happy six month birthday to Lake! A new home getting all wrapped up for you!

Lake shows a strong affinity for fibers and fine textiles. Perhaps it’s no wonder since he’s been swaddled in silks and cashmere since Day One. His mother has traveled to India: to the Himalayan foothills near Kashmir, the silk bazaars of Delhi and the cottage industry silkworm farms of central India. His play mat is a gorgeous sheepskin from a local sheep raised by Nora Shapiro on her fiber farm in Port Townsend. His bedding is a great family sheepskin from his Grandma Julie. His favorite thing to play with so far, according to all accounts, has been a gold silk scarf I picked up in Santa Fe, New Mexico in the late 90’s. It is slowly becoming beloved gold silk shreds.

Over Thanksgiving while we were visiting our best friends in Portland he got ahold of Nana Joanie’s bright raspberry yarn. Oooh, did he love that! He was engrossed.

So the top of Lake’s Christmas list would be 1) scarf 2) string?

And his Auntie Jessica says:

The next Kaffe Fassett

Fassett is an American fiber artist who lives in London. He pioneered what had been the realm of crafts, elevating it as a fine art form. Lake is engaged in his early arts education.

Then, this weekend visiting other dear friends in Bellingham our young Kaffe Fassett was captured in his first original portrait. So, one budding artist commemorated by another:

Life can be simple and rich. A pen, some paper, a ball of yarn, children. A perfect day. I’m glad I spent it with you!

We made a small foray out into the world of shoppers today for Black Friday. The Hanna Andersson outlet was our destination and pajamas were our goal! Lake also tried on a new pair of jeans. He contemplated his new style before deciding to go ahead and get them. Meanwhile, Mummy and Daddy are moving ahead with our biggest purchase of all time, signing our closing disclosure today. One step closer!

Reportedly Lake wasn’t so interested in the applause on Day Three. There must be a story there. He’s intelligent. When he elegantly illustrates this, it probably shouldn’t, but sometimes it takes me by surprise. Turns out he knows inherently how to take such good care of himself. 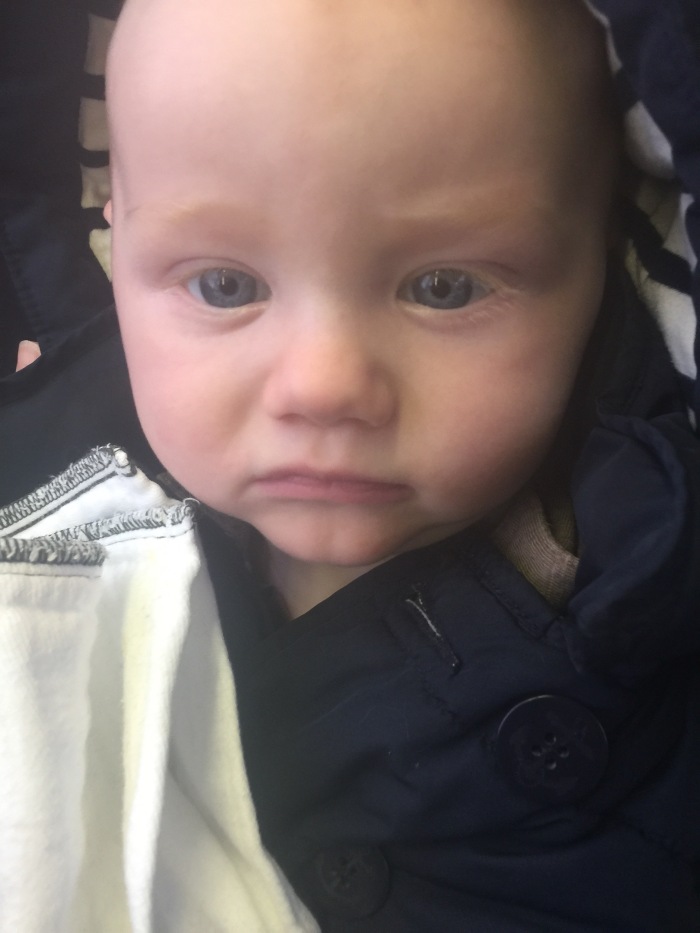 Tuesday night (Wednesday morning actually) was terrible. From 3am to 8am he was crying shrilly and inconsolably. The only thing that comforted him was to keep him on the breast. He ate from 3-4:30 am but then he didn’t go back to sleep the way he normally will if he gets up in the middle of the night, which is in and of itself rare. So then Michael and I were up with him the rest of the night.

He was sounding in pain. We did not know what was wrong. It was distressing. Every time he would lose his latch he would revert to his cry. In retrospect I think it was the applesauce. A bit overboard on the applesauce at daycare. The well intentioned daycare providers fed him applesauce twice on Monday. Apparently he really liked it. It was his first food, and when I had authorized giving him fruit or vegetables to eat. I’d meant it to be a bit of a distraction in emergencies until I arrived to breastfeed him. Well, he had applesauce three times on Tuesday, where he ate “most of the applesauce” each time.
Wednesday morning around 8am, just before getting us both ready to head out the door, I had the thought,

So I have him some adult probiotics. So far he had only had neonatal probiotics with bacteria for exclusively breastfeeding babies. So I opened a capsule of my probiotics and shook it in his mouth. He made a face as he smacked on the dry powder, then promptly fell asleep. Into a deep restorative sleep.

He slept most of the day. He even slept through the daycare fire drill. They piled three other babies in his crib and rolled him outside. He stayed peacefully asleep. And he refused the applesauce.

Today he’s his old self again. Happy-go-Lucky good natured fellow. Ah, happy Thanksgiving! Thankful to be looking forward to four days of mummy bliss together with him the whole time!

Wishing you all the happiest of holidays as well!

We made it through our first day back at work yesterday and first day of Infant School for Lake. Big day. Successful day.

He had his first solid foods. I’m sad I missed witnessing his first food other than direct breastfeeding. But, I have no doubt he enjoyed it thoroughly. Grandpa says on Lake’s behalf:

I can hardly wait to get back there!

You’ve got a smile that’s a mile wide!

I overhead Michael remarking to Lake. Later, as I kissed Lake’s knee and leg, he giggled gleefully in response.

He’s so much fun! And he elicits a mile wide smile from mummy too! Wish us luck in keeping those smiles bright as we make the transition back to work today.

Indeed it is quite grey here. Although that’s not the origin of the name in Grays Harbor. The harbor and the county are named after Captain Robert Gray, an American sea captain who explored the region’s Pacific coastline in 1792. There is officially no apostrophe in the spelling of Grays Harbor County. This is purposefully done to simplify the name. (Much like how there is no space in our family name VanLaanen.) This is where Nana and Grandpa have their winter base camp. Lake’s mummy and uncle’s adolescence were spent in this area. So this weekend we showed Lake the sights. 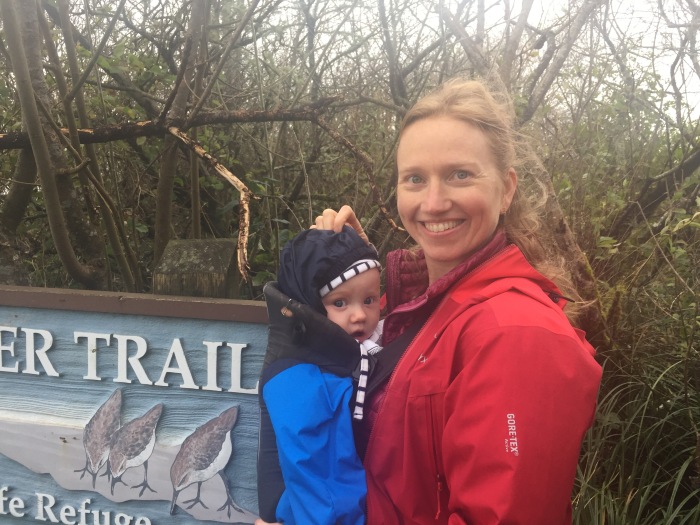 Lake loved every minute of it! This morning we went out to the Bowerman Airport in the city of Hoquiam to hike the Sandpiper Trail. It’s the access point to the bespoke National Wildlife Refuge. The Audubon Society loves this place. It is a migratory bird haven and birdwatchers’ heaven. We passed by uncle Peter’s old high school, Nana’s middle school where she taught until retirement and the Seabreeze Oval running track where mummy used to run. I ran rather fast the 800 and the 1600 meter races and the 4 x 400 meter relay as a tween. This day today has been windy and rainy by turns, and a nice trip down memory lane. We had a pretty clear window of time in which to walk out to the end of the boardwalk. The rain hit us with another squall just as we were arriving back at the car. ﻿

The people are what really provide the bright spot in Grays Harbor. Lake attracted some very special visitors. Our old friends Karen and Chuck were among them. Nana and Grandpa were supremely attentive hosts. Even though it was a weekend full of rain, we were able to enjoy heartwarming times by the fire. Grays Harbor was full of vibrancy in spite of the grey conditions. A motto for life.

Lake is on the cutting edge!

Literally. He first cut his teeth at three and a half months old. She said that indicated he would be early side for all things dental.


That brings us up to today with our friends in Bellingham. News flash! Lake has four upper front teeth that are breaking through. How do I miss these things? Grandma Julie noticed his first two teeth at Daddy’s birthday party in September. Now Lake’s eight year-old  friend spends a few hours with him and informs me he has lots of teeth coming in. It’s confirmed. It takes a village!

It’s happening. The career-mum plan is unfolding and “transition time” is here. I am preparing to return to work on Monday. I’ve been mining the Work-Life Balance resources for the past few months to coordinate this. Childcare, daycare, au pair. I hope the name holds true “work-life balance”. Lake will be starting daycare at the Harborview affiliated Bright Horizons on Monday: when I go in to work he will be accompanying me. We visited this ﻿Bright Horizons facility yesterday where he will be spending his days. It comes with the highest recommendations for quality early childhood development. We got oriented to Lake’s new “Little School” and there were introductions all around. Lots of babies, curious and crying babies, and nice smiling ladies. Then I left for a one hour trial.


Thankfully I met a friend who was just getting off work and we were able to spend the hour going for a distracting walk down to the Seattle waterfront. I was a nervous wreck to leave Lake chilling on the floor. But once Clarence and I got walking through the late afternoon sunshine we didn’t want to turn back. We walked down the hill to Pioneer Square and along the waterfront to the Great Wheel and the Seattle Aquarium. It was great to be outside and it felt a bit naked not to have Lake with me enjoying the sights as well.  We were back right on time. Lake was comforted to see me when we returned. He was crying on the floor where I had left him. The nice care providers assured me if had only decompensated a few moments before. It reaffirmed our glad decision to be welcoming our family au pair in the new year. Until then, this is our privileged adventure. I picked him up, gave him a hug and told him he had been so brave and that I loved him. As you can see, I was joyful to be reunited!
In the evening Lake and I walked back downtown together. We went to Pacific Place to meet cousin Laura for some celebratory shopping.  Surprisingly we found Christmas music and decorations awaiting us!  This morning I woke up, and I thought

What a surreal day! Did that all happen?

I think it did indeed. Wish us all luck and a bon voyage! Today we are off to visit Nana and Grandpa for our finalé weekend capping a phenomenal maternity leave!

Lake was getting some petting practice today. He and the cats have just started to show a new level of interest in each other this week. Lake prefers Mr. Cat because of his fluffy long hair… so soft! Two nice pets before a big grab.

Pet. Pet. Fistful of fur. Pry open little fist. Pet. Pet. Grab fur and hold. Like a little chimp he hangs on tight. I think we’re still at the point where supervision is required. So far so good though, and Mr. Cat is basking in the extra attention!