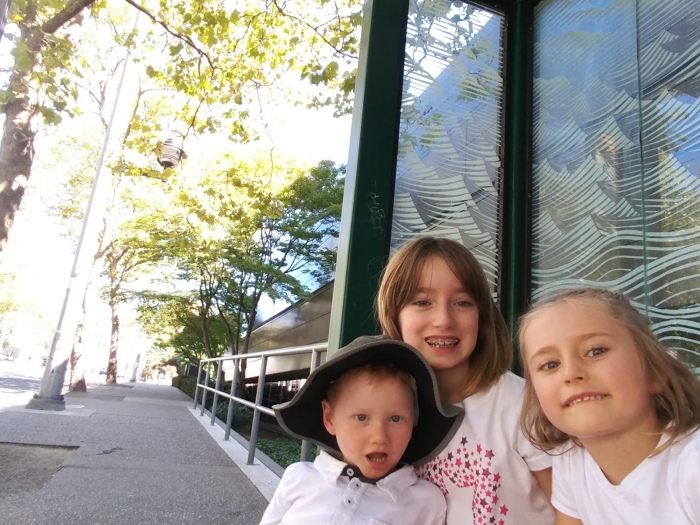 When you and your best friend you’ve been friends with since childhood have children around the same ages, it’s such a special bond. Lake adores Maicy Jane and Hazel, and they likewise treat him like a brother. These kids have so much fun together! They kicked off their recent visit with a slumber party in Lake’s room, so as not to miss out on a minute of their time together. They went to the Pacific Science Center, The Seattle Center and the Woodland Park Zoo. But best of all was all the downtime in between to goof around. They play hard even when they’re at rest. Thank you for making the drive up and for the visit Jessica! We look forward to our next visit.

A perfect day, I’ll gladly spend a lifetime with you!

“Getting up early to run a half marathon tomorrow,” I told my friends at dinner last night.

“Which half?” retorted Greg cleverly, “the first half, or the last half. Because I heard the last half is a lot harder.”

It will be the second half, actually… being that I ran the first half last weekend!

Michael and I ran this one together. It was his first ever half marathon, in spite of having run several full marathons. We both did great and met our goals by having a truly fun time the whole way! We chatted and nearly effortlessly passed the two hours (2:02.22), running 9:33 minute miles, crossing the finish line holding hands. Meanwhile… we’re actually four months pregnant with Lake’s baby sister, now. Baby on board, indeed! I wore the signs for spaß. Baby sister loves running, taking after her parents in that regard. It was altogether an extra sweet experience to share all together. 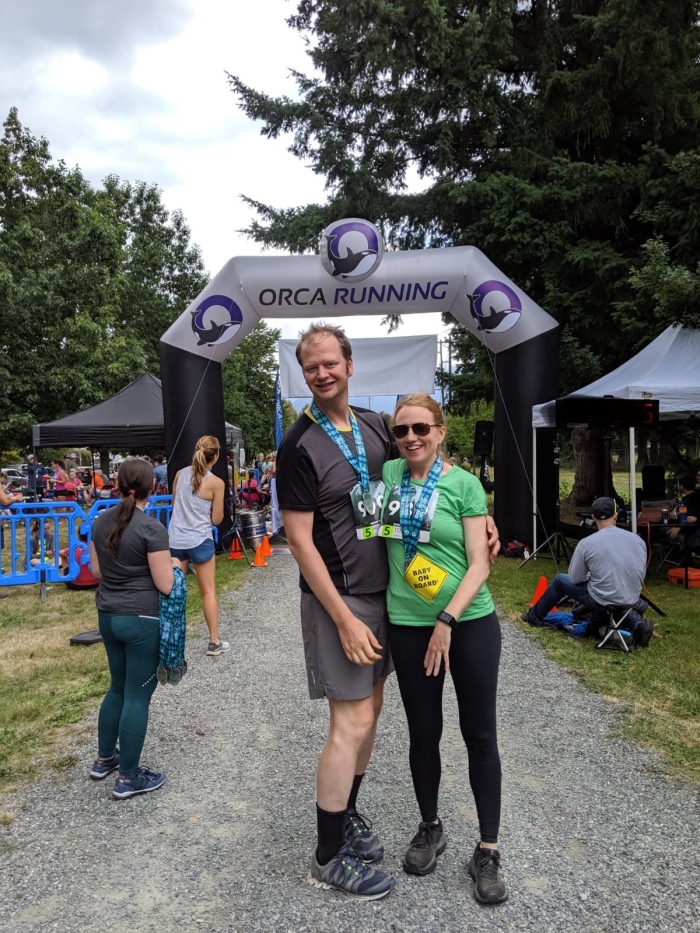 A perfect day for the Iron Horse Half Marathon… I’m glad I ran it with you!

If you are the person who

Originally recommended to my mother by the friendly staff at Greg Grund’s Crown Drug in Hoquiam, WA as a top selling item, JapPop is a true find. It elegantly and easily assists you to open stubborn jar lids. Buy one, buy a dozen and become more popular with your friends and neighbors! Plus be the hero of those awkward late night visitors, jar in hand guilty look in eyes, Can you help me open this? Yes, JarPop can! And will… with pleasure!

Lake’s a fan! With JarPop, you can be this happy too! A perfect day; I’m glad I spent it with you.

Lake went with Michael and Vivien to pick up Langley from his Canyon Ranch summer vacation at Karen and Mark’s. It was a happy reunion! Langley looks as handsome as ever and is game to hop into our car for his next adventure. Our home is now filled fit to burst with cats and Langley and au pairs!

Welcome back, Langley! We love you so. It’s a perfect day with you here!

What does Lake like to do most, besides Hug cats, eat fruits, sing and perform? …Run around and touch things! So it was courageous of us to take Lake to the Museum of Anthropology while we were in Vancouver, BC. I tried to explain that it is a building full of artifacts from dead people so we want to be very quiet and respectful. Luckily there were lots of chairs and benches scattered throughout to climb on and a few touchable artifacts where interacting was encouraged. 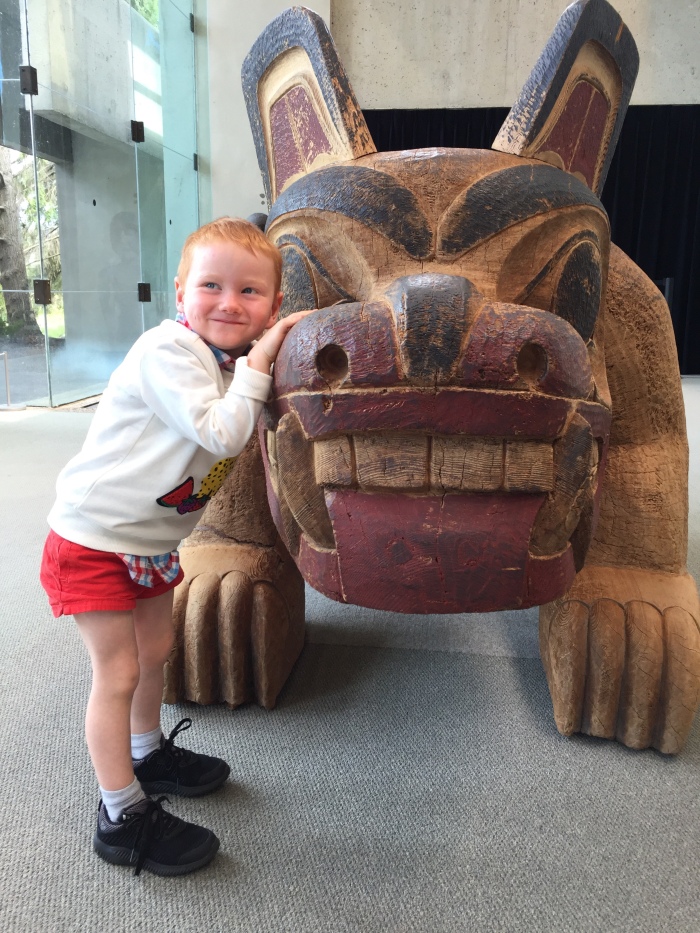 Although to our great disappointment, no climbing on the Haida Bear. Still it was a great time, visiting.

On the drive home as we sat in stop-and-go traffic for much of the Washington’s I-5, Lake innovated the Beluga, his name for a Vancouver, BC to Portland, OR bullet train. We’re totally on board, Lake!

I came out of the woods running. We moved from the Quinault forest where I grew up to “town” the nearest major municipality on the day before I started seventh grade. Then almost by accident we discovered I was fast- at least for the kids in the area. I think my Dad was more thrilled than I was; he more understood the import. For me it was primarily dry-heaving hard work. It started with the school record in the mile. I saw that number on the gym wall and easily bested it. Then my dad saw my 400 m race time and my 400 m splits when I ran the 1600 and saw that they weren’t that different from the 800 m record. So I nabbed the school record as a seventh grader in the mile and then went after the district record in the 800 m. I got that.

I went on to run three years of varsity cross country in high school, finishing up as Captain of the Women’s Team, and competing at the state meet. Then my hormones got the best of my running as I started to fill out I started getting injured and slower. Instead of changing my game, I left competitive running in favor or academics, college, hiking backpacking, traveling and yoga.

I dipped my toe in the road racing in college in 1998. I ran the Vancouver Half Marathon in the Spring Of 1998 in under 2 hours (1:57:38). Encouraged by how easily that intimidatingly long distance had raced out of me, I signed up for a full marathon later that fall in Portland. All summer I hiked and ran in the mountains of Colorado thinking I was doing great training at “altitude”. A month passed at sea level and I finished my Portland Marathon in 6:02, having walked and cried a full three miles near the end. That was my “one and done” Marathon experience. I can check that one off my bucket list and move back to yoga. And yoga I have stayed consistent with for the intervening two decades, even becoming a certified yoga instructor and teaching my weekly class. Along the way I have dabbled in running here and there, often for running dates with Michael (a high school 800 m runner) or simply because at the core I love running. I would get back into running for a while until joint pains flare up, turning me back to yoga and walking.

So it was a serious undertaking when I said yes to a friend’s invitation earlier this year in February to run the Lululemon Sea Wheeze half marathon in Vancouver on August 17, 2019. I would have to really train. I knew the pain and suffering of going into a long race insufficiently trained, and I was also feeling my age where jogs were more like shuffles. So with Michael’s encouragement and training guidance, along with the subsequent introduction of new Brooks Ghost running shoes Michael’s Garmon running watch and later the LuluLemon training guide, I have slowly but surely increased my fitness.

I settled into a routine that really works well for me. I go in to work early at 6 am then I have a few hours after work of “au pair on duty time” in which to go running. I bicycle to Greenlake, lock up my bicycle and then run laps around the lake. Interspersed in the training schedule are also hill work-outs, interval sprints, yoga and meditation. 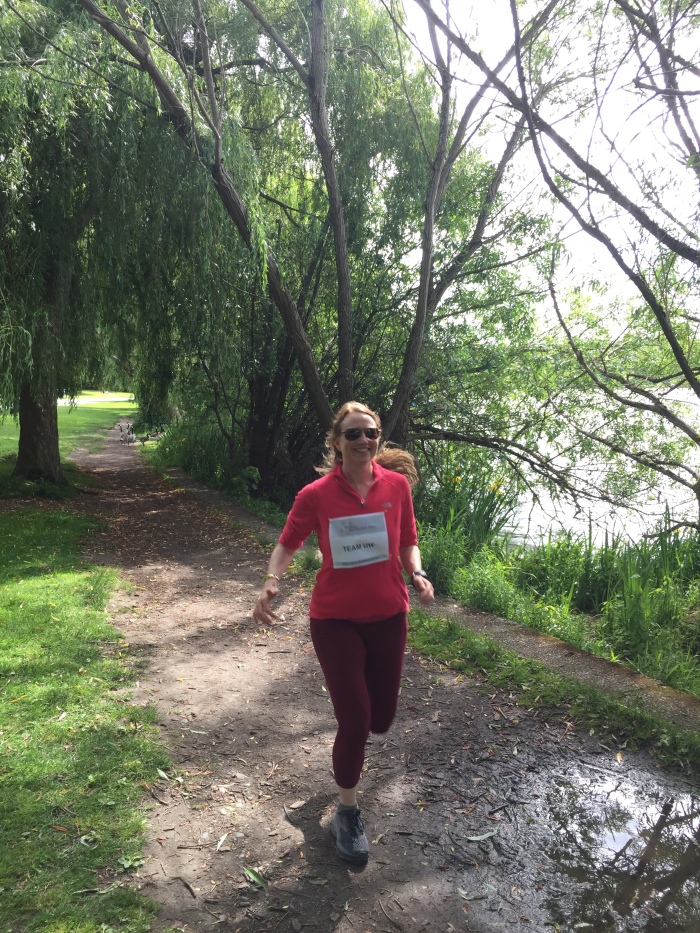 For the month that Lake was with NanaBaba, finding time for running became a little easier and I was also able to run weekends and evenings with Michael. We even enjoyed a few cross-training mountain climbing adventures! 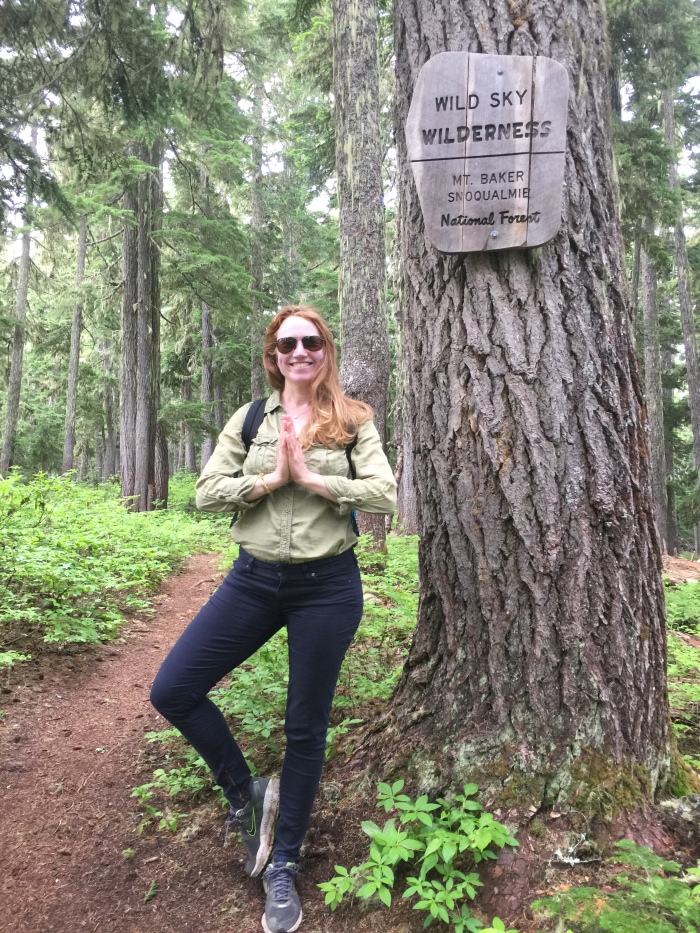 By the time Saturday August 17th came I was ready! And what a race! I went out strong and just kept it up. Amazing race. I ended up surprising myself and I beat my previous half marathon PR from Vancouver, BC 1998 (when I was 20 years old) by 1 minute 1 second with a new record of 1:56:37! Here I am feeling Triumphant! 🙂

We celebrated with my favorite ramen in the world, on the west end of Vancouver Marutama Ra-men and then the LuluLemon yoga party. Michael and Lake were the best cheer squad!

After hearing about the crazy stories about Rematch for a few years now, we never expected to be in the middle of that experience. Rematch is the process by which an au pair is rehomed and/or a family relinquishes their current au pair contract and searches for a new au pair or leaves the program. The au pairs and the families in limbo are in Rematch.

We had matched with Julia Schenkel back in January 2019, so it was our longest lead time and we awaited her arrival with much anticipation. After a few days of settling in we swept her up for nine days of family vacation at Newman Lake. We joined Lake to finish out his month of Summer holidays with NanaBaba. We swam, paddle boarded, went canoeing and ate like royalty of Nana’s cooking and baking and Baba’s grilling. I took long sound naps and logged 50 miles of running. We relaxed and laughed with family. 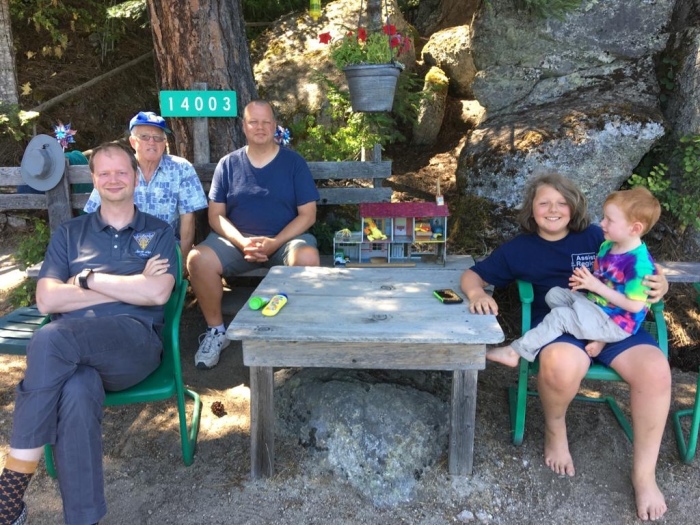 We even celebrated Julia’s birthday a week early with cake and fireworks! 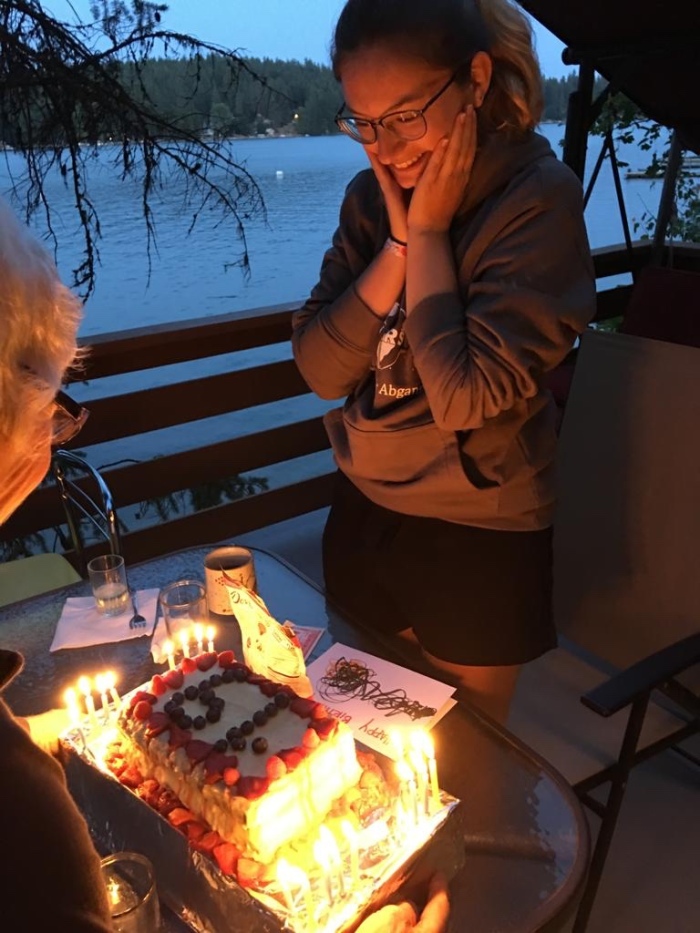 Then all too soon, it was time to say goodbye and thank you to NanaBaba for the loving hospitality.

We headed back to Seattle and as soon as we settled it became slowly but surely clear that Julia was ready to go home to Germany. It was an unexpected development and therefore difficult to accept that she was earnest in her decision to retire the au pair lifestyle, and as soon as possible at that! She thought she could manage two stay for two weeks maximum to tide us over in finding alternative child care. I went into a panic while simultaneously springing to action. We had no time to waste. The agency reopened our account and our Rematch was officially begun. Immediately we began reaching out to au pairs from all nationalities who were also in Rematch for various reasons, the advantage being they were already here in the States, through orientation, onboarded and ready to go. I went through a grieving process about potentially losing our as a German national, right when Lake is about to start German Language School Kindergarten next month. Desperate situations call for desperate measures. We interviewed a Swedish and a Oaxacan au pair. Then by the grace of the universe a German au pair living in Las Vegas names Vivien popped onto the Rematch scene. Her family was opting out of the program. We interviewed her three times and each time the interview was like magic. But each time she wasn’t ready to say yes to matching. Then there was another opportunity that opened up in Las Vegas, another family in Las Vegas in Rematch. I panicked thinking she would prefer to stay in the town where she had already set down roots and made friends. But after interviewing with them while I sweated and prayed, Vivien determined that it wasn’t the right situation for her. She would indeed come to our family in Seattle. Hallelujah! We welcomed her yesterday with a small party, and she said she instantly felt right at home. We’re delighted to host Vivien and happy that Julia, to her great relief, can return home to Germany on Thursday. With a bunch of sweat and hustle we managed to turn lemons to lemonade in just under a week.